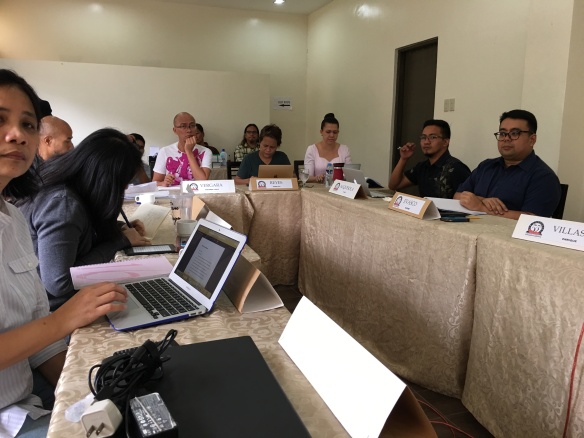 I’M VERY happy to report that on this my last three-year term as director of the University of the Philippines Institute of Creative Writing (UPICW), a number of key improvements in our programs will be taking place very soon that should bring creative writing closer to both its producers and its audiences. Much of this is made possible by support from UP’s Emerging Interdisciplinary Research Program (EIDR), a visionary fund initiated by UP President Alfredo E. Pascual and implemented by the Office of the Vice President for Academic Affairs headed by Dr. Gisela P. Concepcion.

Most significantly, we will be expanding our workshops to include an annual Basic Writers Workshop aimed at developing new and younger writers, and offering, every other year, a seminar for teachers and another for translators. We will also be holding, every semester, an Interdisciplinary Book Forum to bring together experts from various disciplines in a discussion of vital Philippine issues.

These new projects will supplement our regular flagship activities—the National Writers Workshop, held every summer for mid-career writers; the Likhaan Journal, an annual publication that showcases the best of new Philippine writing; the Akdang Buhay series of video interviews of Philippine literary luminaries; and panitikan.com.ph, the website we maintain as the world’s portal to Philippine literature. The UPICW also oversees the annual Madrigal-Gonzalez Best First Book Award and supervises the Gonzalo Gonzalez Reading Room (where our office has been temporarily housed since the Faculty Center burned down last April), and runs the Panayam lecture series featuring our fellows, associates, and advisers.

It’s a lot of work on top of our regular teaching and writing jobs, but it’s what a university-based writing center or institute is meant to do, and the UPICW—established in 1979—is a regional pioneer and leader in this respect, perhaps best known for the UP Writers Workshop that began in 1965 and which has taken place every summer for more than half a century since then. Generations of Filipino writers have gone through this workshop as a rite of passage, and workshops like it have sprung up in other places and universities around the country (the Silliman University workshop in Dumaguete was the first in 1962, and is still going strong).

About ten years ago, the UPICW decided to set itself apart from the other workshops and to perform a unique service to the writing community by focusing our summer workshop on mid-career writers—people with at least one published book or theatrical or film production to their credit—so we could deal with more advanced issues in writing and publishing. It’s been great so far, and we’d like to believe that we’ve helped to sustain the growth of Philippine literature in this time of global challenges and opportunities, but then again we keep remembering how critical the UP workshop’s intervention was in the lives and careers of young writers just starting out, as we all were at one time.

That’s why we agreed to bring back the beginners’ workshop—we’re calling it the Basic Writers Workshop for now, but we’ll think of a better name in the future—to touch base once again with our most promising young authors. And we’re going to do this very soon—over three days, from October 14 to 16, somewhere in the vicinity of the UP campus. Because it’s directed at younger writers—you’d have to be between 18 and 35 years old as of August 15, which is also the deadline for applications.

For our first BBW, we will be looking for works of speculative fiction—a popular genre that can be defined as defined as “a broad literary genre encompassing any fiction with supernatural, fantastical, or futuristic elements.” (Next year, we’ll most likely do young adult fiction). Applicants should submit two original, preferably unpublished stories in the genre in English or Filipino, with each story (which could be an excerpt from a novel in progress) running between 3,000 and 10,000 words. . Applications must be accompanied by a short CV providing the applicant’s contact details, education and employment history (if any), and list of published works and awards (if any). The stories and accompanying CVs must be submitted online to uplikhaan@gmail.com. We’ll be taking in six writers in English and six in Filipino, and successful applicants will receive a modest stipend, as well as board and lodging at the workshop venue.

The Workshop Director is Charlson Ong, with award-winning writers Eliza Victoria, Nikki Alfar, Willy Ortiz, and Vladimeir Gonzales serving as panelists and teaching staff. For inquiries, contact 9818500 (2116) and look for Luna Sicat Cleto, Deputy Director of the UP ICW, or email lcleto9@gmail.com.

We’re still planning out the teachers’ and translators’ seminars—tentatively set for January 2017 and 2018—but they’ll involve upgrading the skills of our high-school and college teachers in teaching new K-12 subjects like Creative Nonfiction, as well as developing more and better translators of texts (not necessarily just literary texts) between Filipino and English and possibly other Philippine languages. These seminars will acknowledge the key roles teachers and translators play in bringing new works and new knowledge to larger and younger audiences,

The UP Interdisciplinary Book Forum, which will start in September and be held every semester over the next two years, is another new project we’re all excitedly looking forward to. The forum will be based on a book recently published by the UP Press on a subject of broad interest, alternating between literary and non-literary titles. What will distinguish the forum will be a panel discussion on the book comprising experts from various fields such as anthropology, law, economics, biology, and medicine.

Our EIDR support runs for two years, possibly renewable for another two, so it’s going to be a very busy and interesting interlude in the history of the UPICW, and by the time we turn 40 in 2019—which is also when I retire from full-time teaching—we should have gone that much farther in realizing our mission of nurturing new writing by Filipinos for Filipinos and for the world.