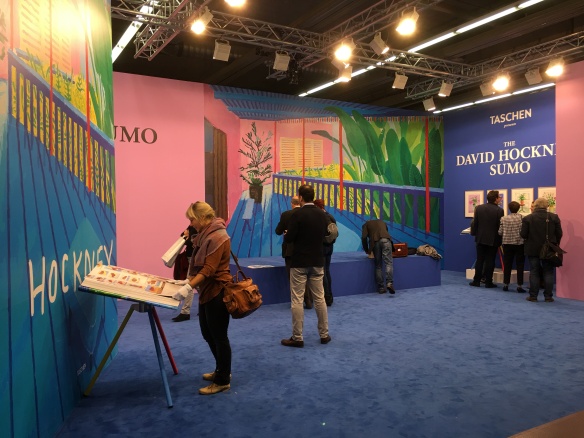 GOING TO the Frankfurt Book Fair was a great opportunity to renew old friendships and make new ones within both the global and Philippine publishing community. While we authors count publishers among our closest and most valuable friends, I realized in Frankfurt that we really don’t talk about their side of the business that much, as engrossed as we often are by our own fabulations.

I was particularly happy to finally meet Renuka Chatterjee, who had been India’s premier literary agent when she worked for the big Osian’s cultural conglomerate in New Delhi. As my first literary agent, Renuka had been instrumental in getting my second novel, Soledad’s Sister, translated and published in Italy; but more than that, she guided me through my first textual revisions, through which I began to learn how international publishing worked. When Osian’s shut down its literary operation, I passed on to another very capable agent in New York, and Renuka eventually joined another leading publishing house in India, Speaking Tiger. We had corresponded by email over the years, but Frankfurt gave us an excuse and a venue for a long-overdue face-to-face.

Another acquaintance lost and found was the dynamic and groundbreaking Malaysian publisher Amir Muhammad, whom I had first met at a conference in Penang in 1992; Amir gifted me with a new trilogy of Southeast Asian stories he had just published, featuring the works of some of our best young Filipino authors. (Those books—like many others I’ve gathered on my travels—are now lodged at the Gonzalo Gonzalez Reading Room in UP, where we keep a repository of contemporary Southeast Asian literature.) Indeed, and not surprisingly, the Malaysians became the Philippine delegation’s best buddies at the fair; we frequented their booth to partake of the nasi lemak and to trade notes on the writing life. The Indonesians were equally hospitable, and our troop of visitors enjoyed a chat and the inevitable selfie with their star, the novelist Eka Kurniawan, whose Man Tiger made the 2016 Man Booker International Prize long list. 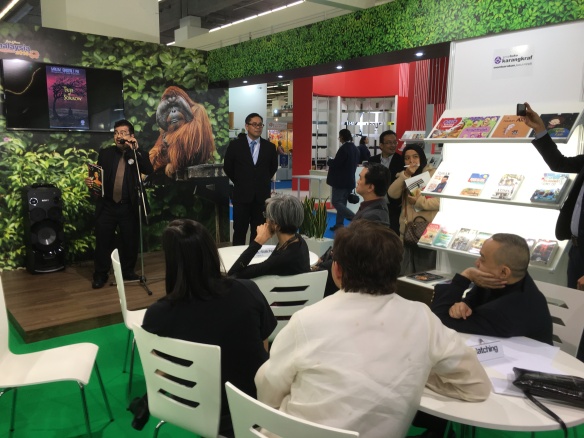 Neither were the long hours at our own booth wasted, as a steady stream of visitors curious about our books and our culture came by to browse, to converse, and to do business. Business, after all, was what most people went to the book fair for, and while some of us minded the store, our delegates were often out meeting with their counterparts from the US, the UK, Europe, and the rest of Asia. (I had a very productive conversation with a gentleman from Montenegro who runs a kind of global blog of blogs—expect “Penman” to appear there soon, but only after it’s published here, of course.) 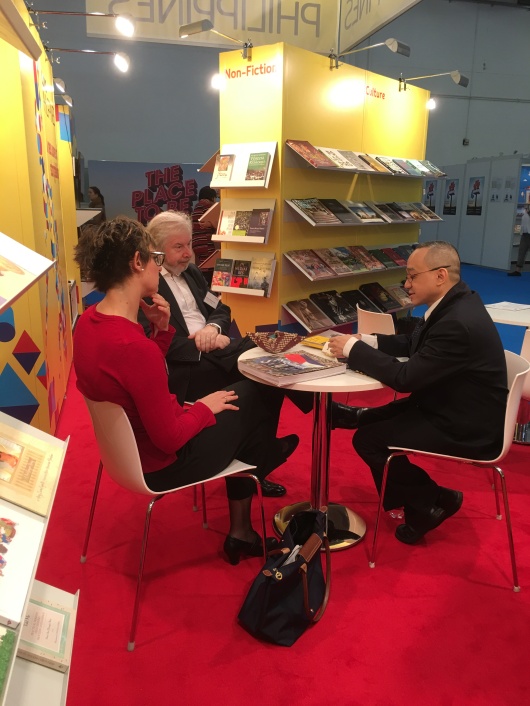 It was the Ateneo University Press’ new boss Karina Bolasco’s third straight year at the fair, which she had previously attended representing Anvil Publishing. University presses don’t generally look at their books as profit-makers, reducing the financial pressure somewhat, but Karina still had a full schedule of meetings with academic publishers, especially longtime Philippine partners such as the University of Wisconsin Press. “Our job is to negotiate for reprint rights,” Karina told me. “We try to find material already published abroad that will be interesting to Filipino readers, and we also offer other presses the rights to reprint Filipino works with a global appeal.”

One of the most visited displays in the Philippine booth this year was that of Mandaluyong-based OMF Literature, Inc., which has published religious and inspirational books since 1957. OMF CEO Alexander Tan told me that their market was big and growing—extending even to OFWs in the Middle East—and that it had developed its own local stars such as pastor Ronald Molmisa, who draws huge crowds to his lectures on love and relationships. “I realized that by breaking the rules and letting people like Ronald use Taglish in their books, we could reach more readers,” Alex said.

On the other hand, literary agents like Andrea Pasion-Flores, who now works with the Singapore-based Jacaranda agency, assume the task of representing Filipino authors abroad and finding publishers to buy their works (and who then assign editors to work closely with the authors on revising their text for publication). Andrea—an accomplished author in her own right who also happens to be a lawyer and the former executive director of the National Book Development Board—is the first and, so far, the only literary agent working actively in the Philippines. Jacaranda has already sold the rights for such distinguished Filipino writers as the late Nick Joaquin, Charlson Ong, Isagani Cruz, and Ichi Batacan (whose Smaller and Smaller Circles will be a movie soon). 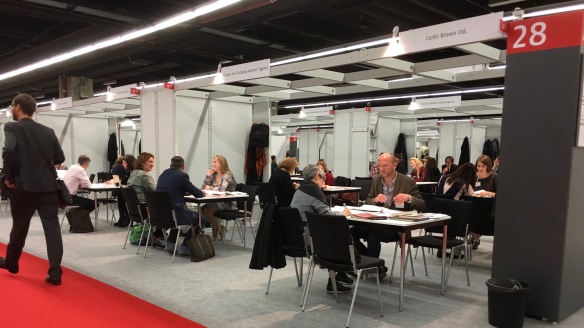 Andrea and her Jacaranda colleagues Jayapriya Vasudevan and Helen Mangham spent long working days in Frankfurt at the exclusive Literary Agents section upstairs, which only registered agents (who paid a hefty price for table space) and publishers could theoretically access. But Andrea secured a pass for me so I could observe the frenetic 30-minute “speed-dating” sessions that took place in hundreds of cubicles. “You’re probably the only author in this room,” Andrea told me. When I asked her what international publishers were looking for from Filipino authors, her response was quick and to the point: “The big novel, more genre fiction, and more high-quality literary fiction—and less ego, please, as Filipino authors generally aren’t used to revising their work!”

Back downstairs the next day, my companions at the Philippine booth were surprised to see me in animated conversation in Filipino with a Caucasian lady, whom I was happy to introduce to everyone. Our visitor was Annette Hug, a novelist and translator who had come from her home in Zurich to meet with me and with her publisher at the book fair. Annette—who took her MA in Women’s Studies in UP and regularly practices her Filipino with an OFW friend—had just translated a piece I had published last month in the Philippine edition of Esquire magazine, a piece on extrajudicial killings that had somehow gone viral; Annette’s translation had come out that same day in a Swiss newspaper and she brought me my copies, fresh off the press. But apart from that sad topic, Annette had also just published a novel in German, Wilhelm Tell in Manila, based on Jose Rizal’s work on that Swiss hero’s life, and the UP Press will now explore the possibility of publishing a translation of her novel in the Philippines. 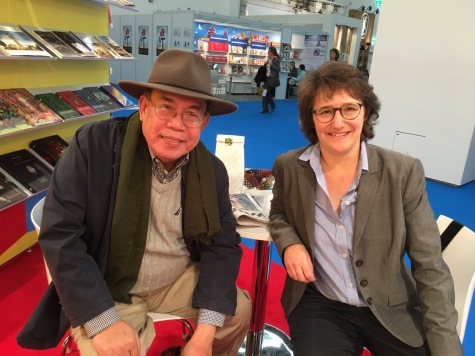 Another visitor was children’s book author and Palanca Hall of Famer Eugene Evasco, who just happened to be in Munich on a three-month research fellowship, so he took the three-hour train ride to Frankfurt to visit the fair and to take in the mind-blowing displays at the children’s literature section.

Of such providential encounters, magnified into the thousands, was the Frankfurt Book Fair made, and while I was there less on business than as a roving cultural ambassador of sorts, I was glad and privileged to tick another item off my bucket list. I’ve run out of space to talk about an excursion some of us took to trace the footsteps of that quintessential Filipino writer, Jose Rizal, in nearby Heidelberg, so I’ll save that for another column soon. 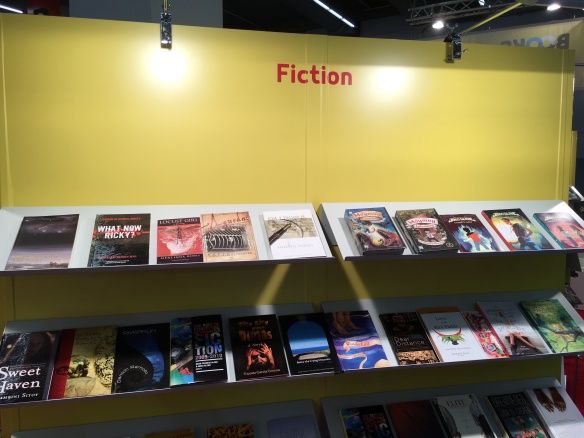