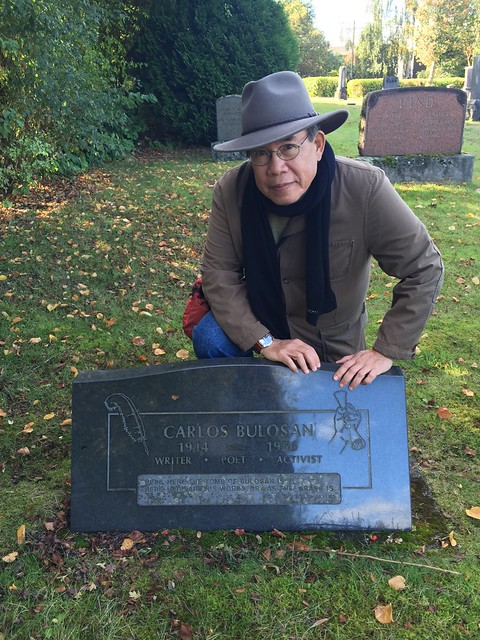 TAKING A short break from my fellowship in Washington, DC, Beng and I flew off to the West Coast a couple of weeks ago for a weekend with our daughter Demi and her husband Jerry. Demi was celebrating her 40th birthday (can you believe it?) and had sent us tickets to join them in Seattle; they live in San Diego, but they’d loved Seattle from a previous visit and wanted to share that discovery with us.

Over three days, we did the Seattle thing, and had loads of fun: the Pike Place Market, the Space Needle, a glimpse of the Chihuly glass garden, antiquing in Snohomish, and a boys’ tour of the Boeing plant in Everett. But it was an unexpected turn in the program that made it all the more worthwhile.

On the drive into the city from the airport, I had mentioned to Jerry (who had been born in Rhode Island to parents from Bicol) that two Asian-American icons—Carlos Bulosan and Bruce Lee—were buried in Seattle. Jerry’s an engineer in the aviation industry, but like Demi, he has a keen interest in culture and in his roots.

Bulosan’s name holds a special significance for our family. In high school, with some help from Beng, Demi had put together a book report on America Is in the Heart—Bulosan’s sprawling semi-autobiographical novel about the Filipino immigrant experience in America, first published by Harcourt Brace in 1946. I myself had written my undergraduate thesis at the University of the Philippines on Bulosan, fascinated by his often paradoxical appreciation of America, which he described as being at once “so kind and yet so cruel.”

Born in Pangasinan, he shipped out to Seattle in 1930, and never returned until his death from bronchopneumonia, also in Seattle, on September 11 (yes, 9/11) in 1956. (There’s some debate over the year of his birth, which has been variously listed as 1911, 1913, and 1914.) In the US, without the benefit of college, he became a voracious reader and taught himself to write, and became known both as a writer and a labor activist. Since the 1970s, many critics such as Epifanio San Juan Jr. have championed a reappreciation of Bulosan and his work; in 1973, the University of Washington Press republished America Is in the Heart, which was translated into Filipino as Nasa Puso ang Amerika by Carolina S. Malay and Paula Carolina S. Malay and published by Anvil in 2000.

When Demi and Jerry made plans to marry in 2007, I knew what I was going to give them as a wedding gift. After a long and eventful search culminating in a meeting with the seller in a Jollibee in Diliman, I had just acquired a first edition of America Is in the Heart, and carried it with me to San Diego. This copy had been inscribed by Bulosan to his friend Fred Ruiz Castro: “This story of my life will, I hope, bring me closer to you and our native land through our good friend J. C. Dionisio, with my best wishes, Carlos Bulosan, Los Angeles, 3-6-1946.” 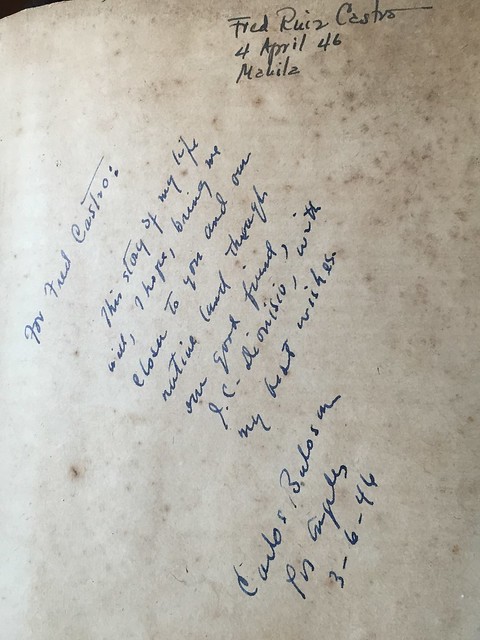 Upon receiving the book in Manila almost a month later, Castro—who became Chief Justice in 1976—also signed it on April 4, 1946. I signed the book on a following page on April 2, 2007, and Beng and I presented it to Demi and Jerry on April 15. The book now rests proudly on their bookshelf in San Diego. (When I first wrote about this in my column—about finding that “holy grail” of a signed first edition and giving it to our only child on her wedding in America—I got a pleasant surprise upon my return: the gift of another copy of an early edition, acquired by another Filipino writer when he was in college, Greg Brillantes. That book, signed by Greg, now sits on my topmost shelf in Diliman.)

Now back to Seattle. On our last full day there, after touring the Boeing plant in the morning while our wives did their own thing downtown, Jerry and I were hit by the same brain wave in the car: why not look for Carlos Bulosan’s grave and pay our respects to our literary hero? A little Googling quickly revealed his gravesite, at the Mt. Pleasant Cemetery on Queen Anne Hill. We picked up Beng and Demi at the hotel, and located the cemetery not too far away.

GPS helped bring us there, but it couldn’t pinpoint the exact grave among the many hundreds on the site; thankfully, Google also yielded a picture of the grave itself, and the four of us spread out across the cemetery, looking for visual markers—particularly a white obelisk in the distance; it took about 20 minutes until Demi yelled “I found it!”

It was, ironically, very close to the cemetery gates, on the left side. Beng picked some flowers nearby and offered them at the foot of the marker, which read: “CARLOS BULOSAN 1914-1956 Writer Poet Activist,” followed by an epitaph that Bulosan himself had written: “Here here the tomb of Bulosan is / Here here are his words dry as the grass is.” It was a pretty spot, truth to tell, and the grass was hardly dry. After the cemetery, we visited Seattle’s International District near the waterfront, to peek at the Bulosan exhibit through the windows of the historic Eastern Hotel, where Bulosan and other Filipino cannery workers lived. 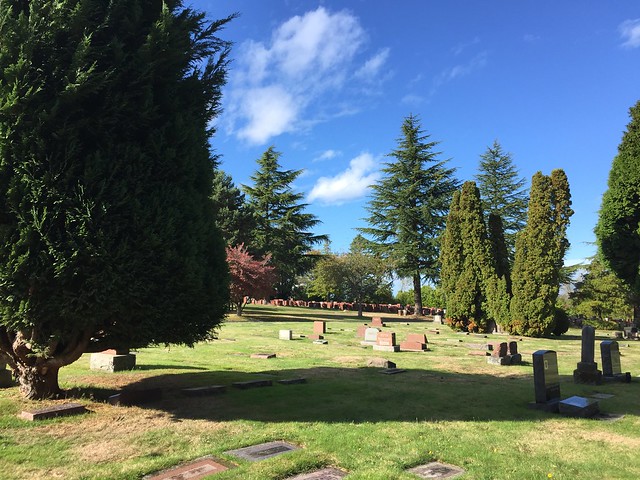 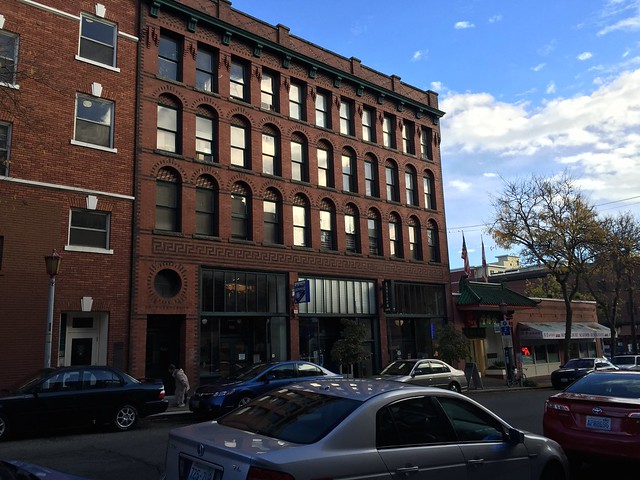 Demi and Jerry don’t know it yet, but they have another Bulosan memento coming from me: a copy of the Saturday Review of Literature from March 9, 1946, on the cover of which the famous pen-and-ink portrait of Bulosan first appeared. One of these days, I’ll pay another homage, to the Bulosan memorabilia on exhibit at the University of Eastern Pangasinan in Binalonan, where they keep copies of his letters, commemorate September 11 as Carlos Bulosan Day, and teach a 3-unit course on his life and works. There’s a trove of material on him at the University of Washington library, and perhaps on another visit to Seattle, with more time, I might look into that, too. But as every Fil-Am and indeed every Filipino should know, a pioneering voice like Carlos Bulosan’s can ring everywhere and forever, in the heart.