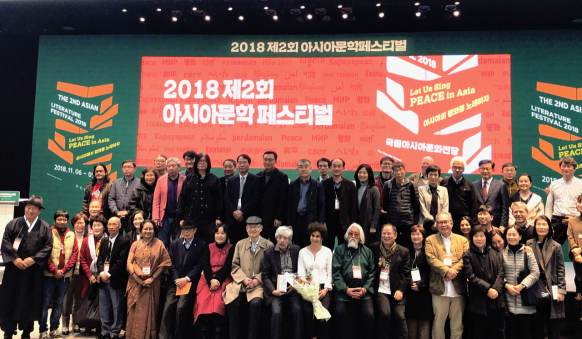 TO FOLLOW through on my initial report last week on the 2ndAsian Literature Festival in Gwangju, South Korea from November 6 to 9, it was an exhilarating and enlightening experience to be among fellow Asian writers getting together to wield literature as a weapon of peace.

I’ve been to many international literary festivals and conferences, but inevitably these gatherings—even those held in Asia—have tended to focus on Western writers and their concerns. For a while back there, the Man Asian Literary Awards, which culminated in a gala ceremony in Hong Kong, drew some special attention to contemporary Asian writing, but that fledgling effort folded up too soon. The Asia Pacific Writers and Translators (APWT), which will be holding its annual conference in Australia a few weeks from now, is arguably the region’s largest and most active literary network, but with so many topics on offer and so many attendees, it’s hard to keep your eyes and minds on one thing at any one time.

The Gwangju meeting felt just right, bringing together 11 writers from outside Korea to meet and interact with about the same number of their Korean counterparts. I was privileged to be the first Filipino to be invited to this young festival, which was headlined last year by 1986 Nobel Prizewinner Wole Soyinka. This year, the prolific and immensely talented Chinese novelist Yan Lianke, winner of the Franz Kafka Prize, led the delegates, who also included the Mongolian poet Damdinsuren Uriankhai, the first winner of the Asian Literature Award, which is given out at the festival.

Why Korea? Because—even as it globally exports kimchi, Koreanovelas, cellphones, and K-Pop—Korea (at least the southern part of it) is seeking to strengthen its cultural connections to the world at large, by exposing its people to cultural and literary movements from the outside, especially from beyond the Eurocentric zone. Among the key agents of this pivot is the publisher and editor Kim Jae-yong, a professor of modern Korean literature and world literature at Wonkwang University in Iksan, supported by the likes of Prof. Sohn Sukjoo from Dong-a University in Busan. Last year, it was also Prof. Kim and Prof. Sohn who brought another group of writers, including myself, to Jeju to discuss how our literatures were emerging out of the Western shadow.

The Gwangju event was less a conference than an intense but still festive sharing of experiences and responses to the many threats to peace, freedom, and justice around the world today, especially in Asia. As the festival chair Prof. Paik Nak-chung put it, “Particularly, 2018 is a special year when the journey towards denuclearization and lasting peace on the Korean Peninsula began as the leaders of the two Koreas met in Panmunjom and in Pyongyang. The festival urges Asian writers to carry on the spirit of peace on the Korean Peninsula to sublimate Asia’s wounds through literature.”

Writers, of course, are neither politicians nor diplomats (despite Shelley’s generous attribution of poets as the “unacknowledged legislators of the world”). Much of what we write inevitably has political content and intent, but governments don’t listen to writers (and would, in fact, shut down the teaching of language and literature as superfluities, like our magistrates did last week). We agreed, therefore, that our approach has to be direct to our peoples and audiences, to resensitize them to their humanity; freedom and justice are prerequisites to any kind of real and lasting peace, and these in turn are premised on the worth of the individual, which literature can help establish.

It was a great honor to share the company of the likes of Bao Ninh, a Vietnamese novelist who had fought the Americans during the war and had once found just himself and a comrade left alive in their platoon after a bloody encounter. His novel Sorrows of War is a poignant reflection on the fruitlessness of war, and the man’s quiet but fervent advocacy persuaded us (with me as one of the jurors) to award him the Asian Literature Award for this year. Another writer I got along very well with was the Taiwanese novelist Syaman Rapongan, a champion of his Tao tribe from Taiwan’s Orchid Island, who gave up a professorship in anthropology to pursue his true passions, writing and seafaring; “The ocean is a poem we cannot recite to the end,” one of his works memorably begins. The bestselling Korean novelist Sim Yungkyung, a molecular biologist by training, also became a good friend, and with our very capable guide Ms. Kim Hye Ji, my wife Beng and I saw the best of Korean culture and hospitality that week.

Not incidentally, the Asian Literature Festival was organized and sponsored by Korea’s Ministry of Culture, Sports, and Tourism through Gwangju’s impressive Asian Culture Center (ACC), which should be a model for other countries to emulate. But the best service of festivals like this is to remind writers—especially writers of conscience—that as solitary and sometimes as disheartening as their work can be, they are not alone, and are appreciated.